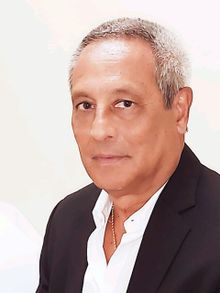 Together with Mr. Araujo, Mr. Derrick E. Lousaing founded the Fracture and Orthopaedic Clinic in St. Clair, Trinidad in 2003 with the vision of offering a complete range of specialist orthopaedic care and diagnostics at a single multi-purpose facility.

Mr. Lousaing has gained extensive surgical experience from his 35 plus years of practice. Upon completion of his undergraduate degree in Jamaica in 1984, he worked at the Port of Spain General Hospital, Trinidad, in various surgical disciplines for three years until he departed for the UK to pursue his post-graduate degree. During his four-year orthopaedic surgery residency in the UK, he attained the position of Senior Registrar in Orthopaedics.

Returning to T&T in 1991, Mr. Lousaing then pioneered hip and knee arthroplasty, which he continued to specialise in throughout his career, establishing himself as one of the most experienced arthroplasty surgeons in the Caribbean. Mr. Lousaing currently performs approximately 150 total joint replacements a year in Trinidad and at clinics across the Eastern Caribbean.

Recognising the importance of continued professional development, Mr. Lousaing regularly participates in local and international hands-on and laboratory-type training, as well as medical meetings, workshops and evaluations in all aspects of orthopaedic surgery. He has presented numerous papers and contributed to several highly respected professional publications. Mr. Lousaing has been a feature speaker at several local, Caribbean and international orthopaedic forums.

At the Fracture and Orthopaedic Clinic, a fertile training ground has been created for post graduate training for several local surgeons and has resulted in the performance of several first time procedures performed locally including single compartment knee replacement and tumour replacement megaprosthesis.

Mr. Lousaing remains at the forefront of hip and knee arthroplasty in the Caribbean and currently has specialist interest in complex orthopaedic trauma to the pelvis and lower limb and all aspects of arthroscopic surgery and knee ligament reconstruction. His practice at Fracture and Orthopaedic Clinic is extensively devoted to hip and knee orthopaedic care, however his experience allows for a comprehensive surgical repertoire to general orthopaedics.

Mr. Lousaing is currently the Chairman of Fracture and Orthopaedic Clinic and serves as a Director of Tri-Med and Caribbean Orthopaedics Limited.