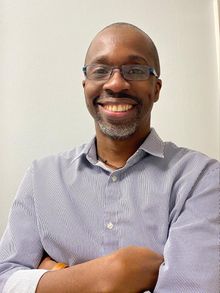 Mr. Leroy Anthony James graduated from the University of the West Indies in 1994. He migrated to the UK in 1997 after completing his internship and early surgical training in Trinidad.

Mr James has gone on to become a fellowship trained Orthopaedic Surgeon having undertaken specialist training in Alder Hey Hospital, Liverpool; Agnes Hunt and Robert Jones Hospital in Oswestry and the Royal Children Hospital in Melbourne, Australia. He undertakes all categories of orthopaedic work but has a specialist interest paediatric conditions; limb trauma and deformity; skeletal dysplasias and foot and ankle problems.

Mr James was appointed as a Consultant Orthopaedic Surgeon in Alder Hey Children Hospital. Liverpool in January 2008 and took up the post in July 2008. His public practise consists of 50% General Paediatric Orthopaedics and 50% Special interest (Limb Reconstruction Surgery/Foot and Ankle).

Mr James is a member of the British Limb Reconstruction Society (BLRS) and the British Society of Children Orthopaedic Surgeons (BSCOS). He also lectures internationally in the UK and Europe. He has a number of peer reviewed publications and International/National podium presentations

Mr James joined the Fracture and Orthopaedic Clinic in February 2015.